This article originally on the Berkshire Eagle.
By Dick Lindsay
PITTSFIELD — Berkshire inmates will soon learn how to grow fresh vegetables toward a fresh start for re-entry into the community and workplace.

The Berkshire County Jail and House of Correction has added a $500,000 aquaponics greenhouse that will help teach high-risk, high-need inmates the math, engineering, technology and science of growing lettuce, basil and other leafy greens, according to Capt. Robert "Robin" McGraw, a deputy sheriff with the Berkshire County Sheriff's Office.

Aquaponics combines the raising of fish — in this case tilapia — and growing plants, with the fish feces used to fertilize the plants in deep water beds.

McGraw, who manages the operation, said the greenhouse is another crucial part of the educational programs in place for decades at the countywide lockup.

"If we're not successful with this, [the inmates] are back on the streets doing drugs and getting in other trouble," he said.

The greenhouse has been operational since January, already producing 6,000 heads of lettuce, which McGraw and several corrections officers have harvested and initially distributed to local food pantries and charities.

"We've had nothing but compliments about the quality and freshness of the lettuce," he said.

Once the 60- by 72-foot greenhouse is certified to provide food to the jail and house of correction, McGraw says the majority of the produce and fish harvested will feed the inmates, with 15 percent going to the needy in the county.

McGraw began developing the greenhouse project five years ago with fundraising through the Berkshire Education and Corrections Service. The nonprofit arm of the house of correction was set up to establish and manage successful programs for inmates. He said several local foundations and business leaders contributed money and in-kind services to the greenhouse project.

He plans to add raised garden beds outside the greenhouse, growing a variety of vegetables. He also wants the public to visit on weekends to learn about aquaponics farming and how the greenhouse program benefits the inmates.

"The sky is the limit on what we can grow here," he said.

Dick Lindsay can be reached at rlindsay@berkshireeagle.com. 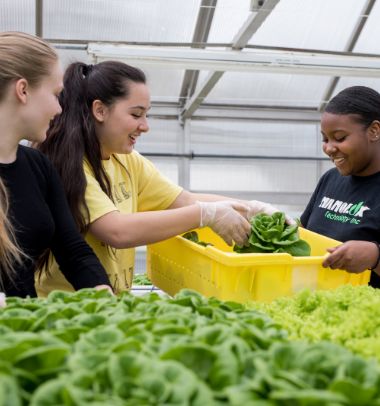 GET TICKETS Tour our aquaponics vertical farm and learn about growing your own fresh fish and veggies in a symbiotic ecosystem! Learn about how aquaponics can help protect our coeans, conserve our freshwater resources, and feed a growing population! You will also get a sneak peak at the other circular economy businesses at the Innovation […]

GET TICKETS Shreds and Shrooms is the ULTIMATE family activity! This immersive 2-hour experience starts with hands-on activites in the 100 Gardens Aquaponics Lab and MUSH! mushroom farm. Then, you will cook ingredients grown on-site at the Innovation Barn to make the fabulous "Philly, Not Really" mushroom "cheesteak" with a fresh side salad. The cooking […]

PITTSFIELD, Mass. — The Berkshire County House of Correction has had something fishy going on for awhile now.    Community leaders and others got a chance on Wednesday to tour an inmate-run greenhouse that takes hydroponics — growing plants in a nutrient solution — to another level of sustainability by using fish waste as […]

Forging connections between education, food, and the environment through aquaponics